Dr. Arina Melse, a leading researcher at the Baltic Human Rights Society made a presentation on 27 November 2020 at an annual conference devoted to human rights issues in Latvia which was organised by the Riga Graduate School of Law (RGSL) in cooperation with the Ministry of Foreign Affairs of the Republic of Latvia. This year, the conference was dedicated to the dialogue between courts. For the fifth consecutive year, Arina spoke about the newest rulings involving Latvia at the European Court of Human Rights.

Speakers at the conference included Judge at the European Court of Justice and RGSL Professor Dr. Ineta Ziemele, Judge at the European Court of Human Rights and Associate Professor at the RGSL Dr. Mārtiņš Mits, the President of the Constitutional Court of the Republic of Latvia Dr. Sanita Osipova and the Latvian Representative before International Human Rights Organisations Kristīne Līce. The conference was opened by the RGSL Rector Dr. Pietro Sullo and Dr. Mārtiņš Mits.

The annual human rights conference has a recognized position among academic and professional events in Latvia. Those attending include representatives from various legal professions — judges from the Constitutional Court and courts of general jurisdiction and their assistants, prosecutors, attorneys at law, ministry officials, members of the Latvian Parliament and representatives from its Legal Affairs Office, representatives from the Ombudsman’s Office and non-governmental organisations and students.

The aim of the discussions at the conference is to provide an insight into current problems in applying the Convention for the Protection of Human Rights and Fundamental Freedoms in Latvia, and promote an understanding of the causes of the problems and solutions for overcoming them by combining an academic and professional approach. The discussions were, therefore, aimed primarily at those whose professional activities are involved in ensuring that the Convention is observed, but the conference is also a useful source of information on current issues relating to the protection of human rights in Latvia.

Recording of the conference speech of Arina Melse (in Latvian) 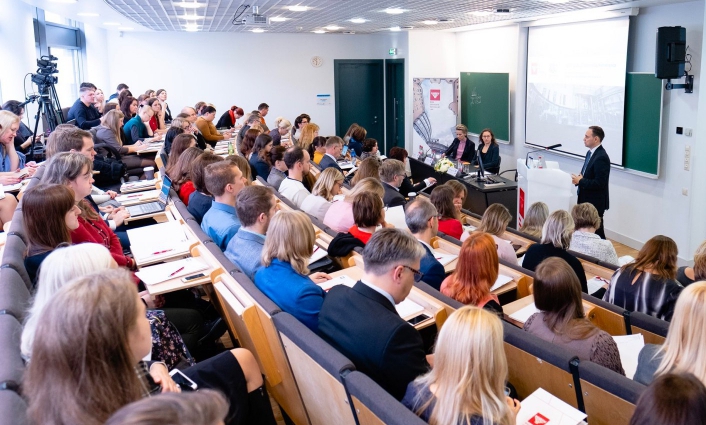